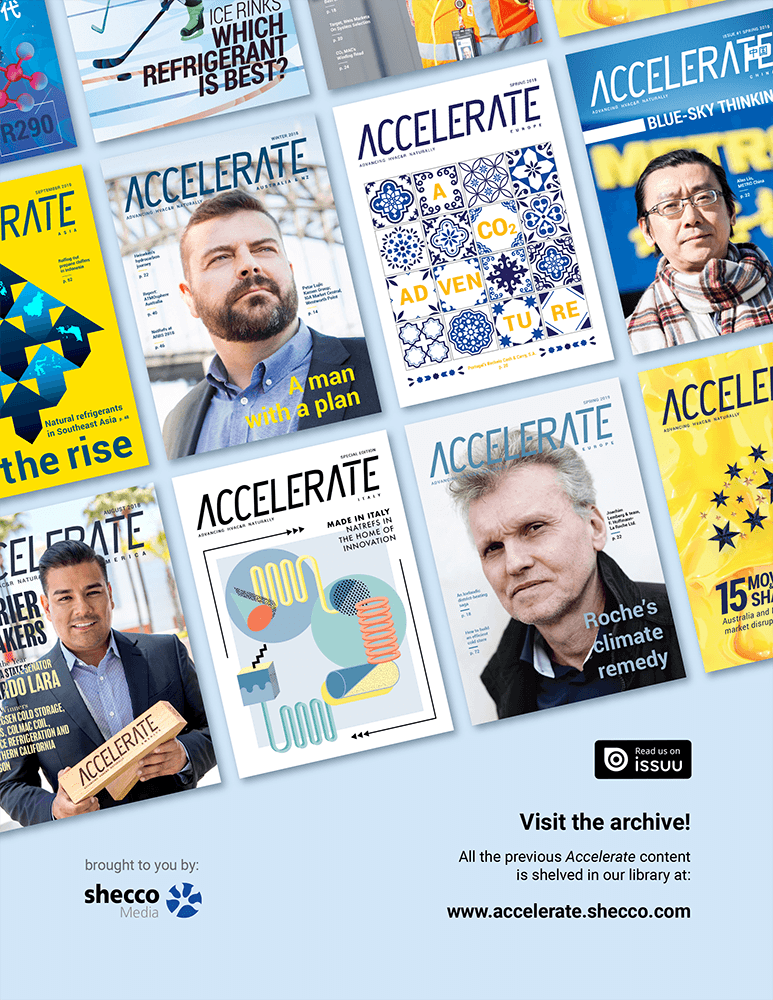 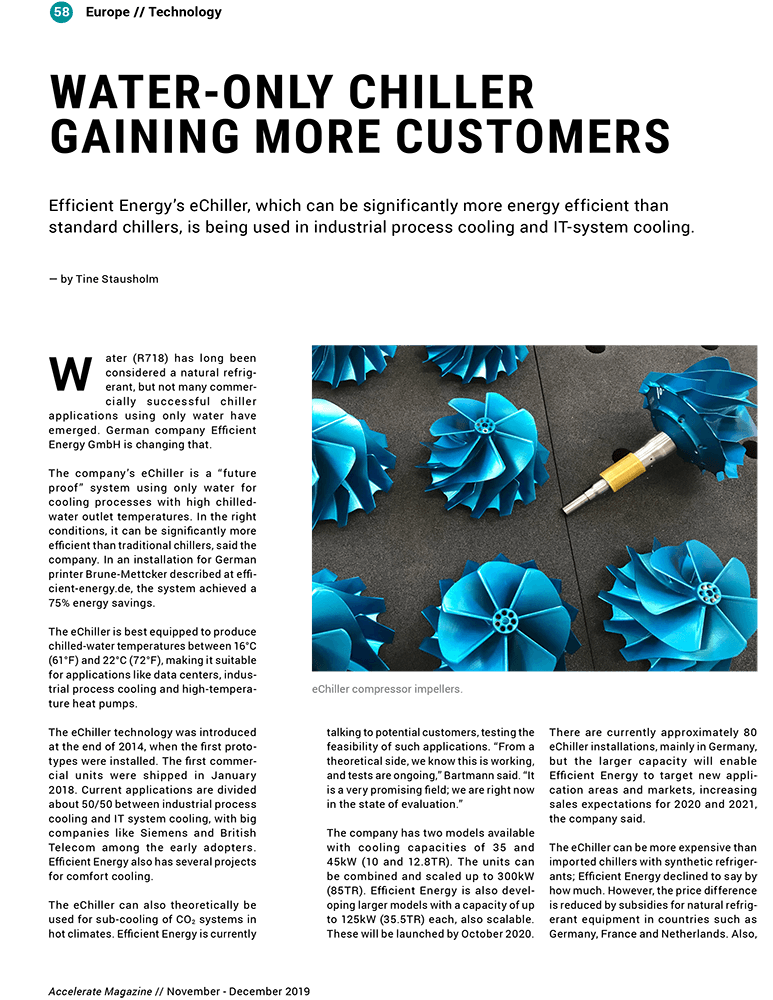 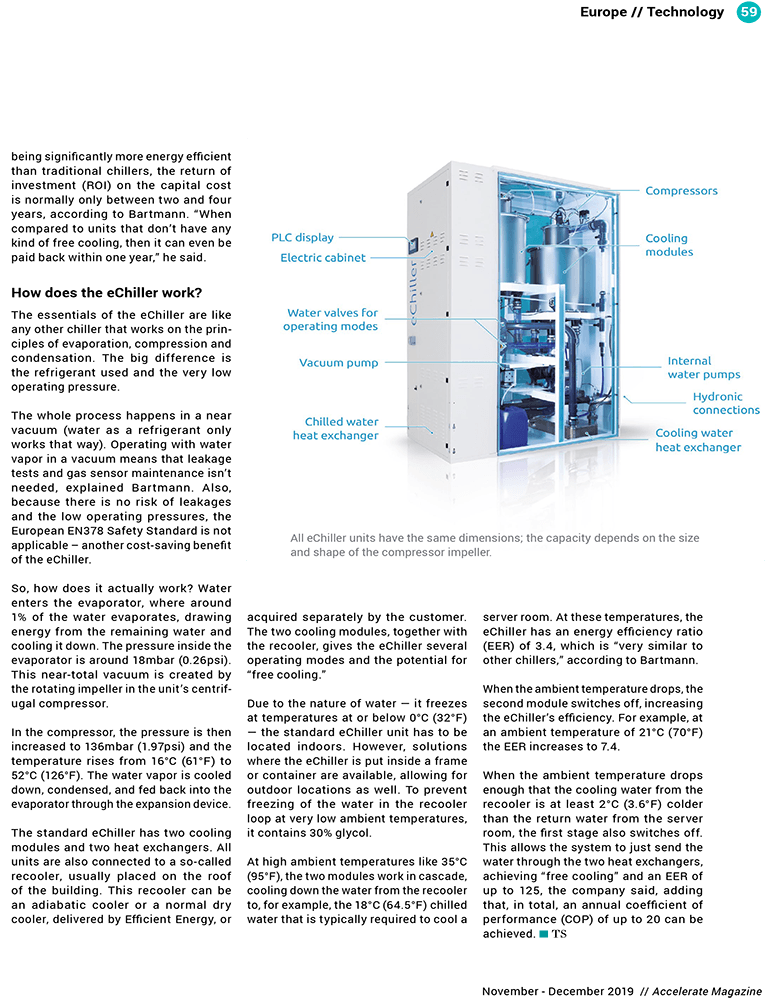 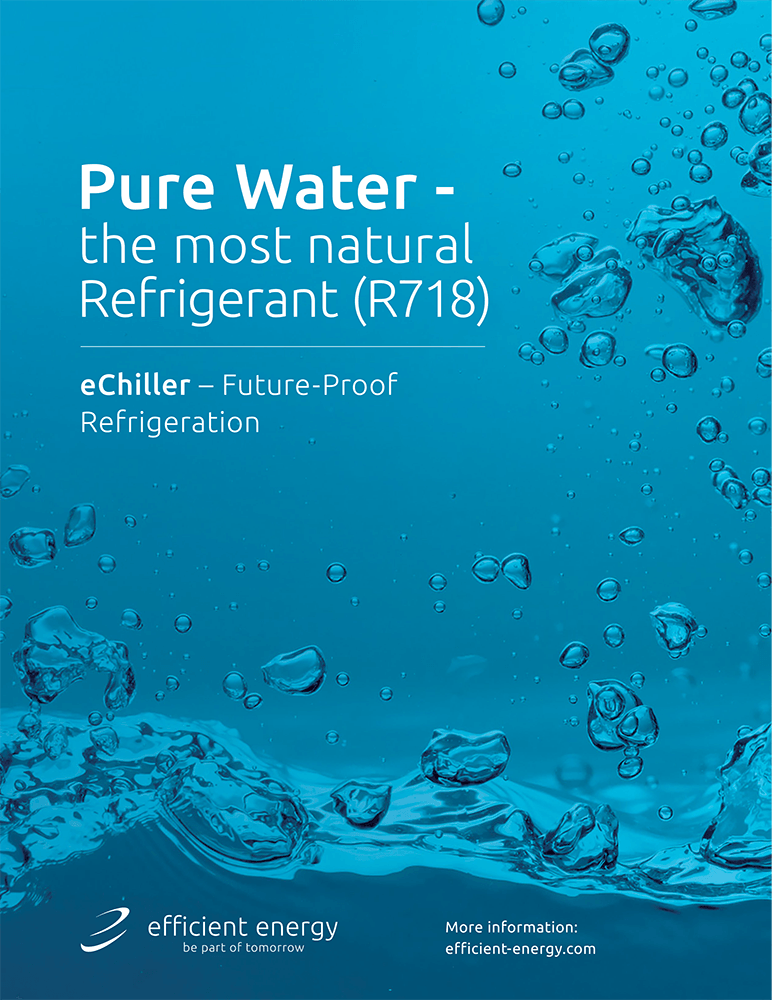 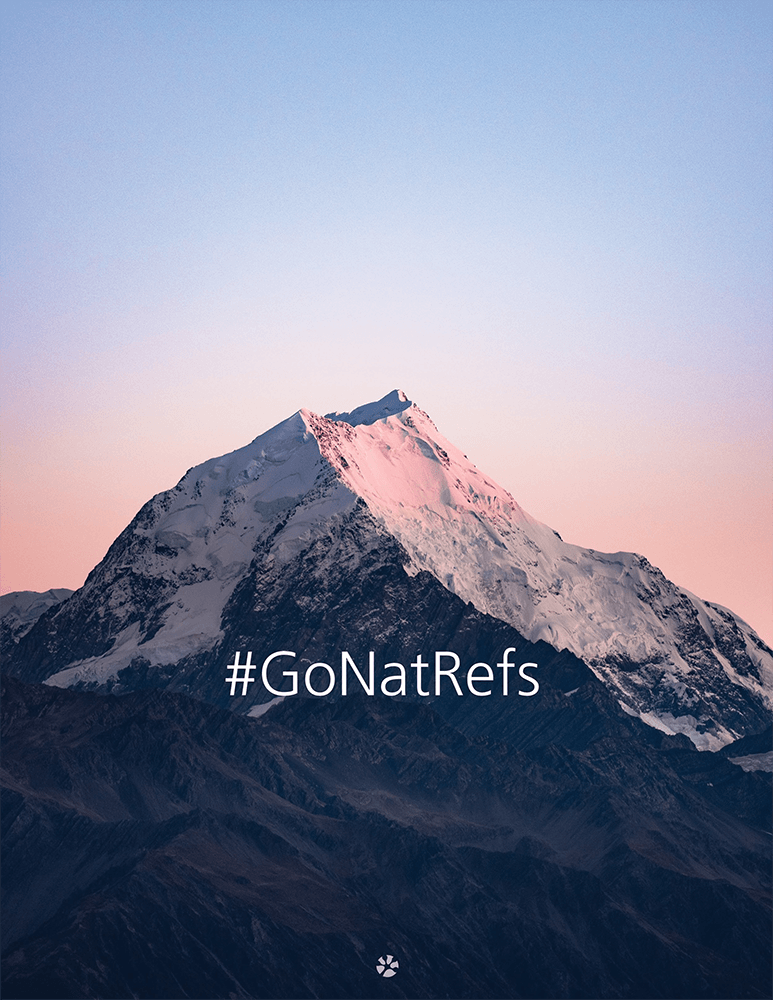 Water (R718) has long been considered a natural refrigerant, but not many commercially successful chiller applications using only water have emerged. German company Efficient Energy GmbH is changing that.

The company’s eChiller is a “future proof” system using only water for cooling processes with high chilled water outlet temperatures. In the right conditions, it can be significantly more efficient than traditional chillers, said the company. In an installation for German printer Brune-Mettcker described at efficient- energy.de, the system achieved a 75% energy savings.

The eChiller is best equipped to produce chilled-water temperatures between 16°C (61°F) and 22°C (72°F), making it suitable for applications like data centers, industrial process cooling and high-temperature heat pumps.

The eChiller technology was introduced at the end of 2014, when the first prototypes were installed. The first commercial units were shipped in January 2018. Current applications are divided about 50/50 between industrial process cooling and IT system cooling, with big companies like Siemens and British Telecom among the early adopters. Efficient Energy also has several projects for comfort cooling.

The eChiller can also theoretically be used for sub-cooling of CO2 systems in hot climates. Efficient Energy is currently talking to potential customers, testing the feasibility of such applications. “From a theoretical side, we know this is working, and tests are ongoing,” Bartmann said. “It is a very promising field; we are right now in the state of evaluation.”

The company has two models available with cooling capacities of 35 and 45kW (10 and 12.8TR). The units can be combined and scaled up to 300kW (85TR). Efficient Energy is also developing larger models with a capacity of up to 125kW (35.5TR) each, also scalable. These will be launched by October 2020.

Efficient Energy’s eChiller, which can be significantly more energy efficient than standard chillers, is being used in industrial process cooling and IT-system cooling.

There are currently approximately 80 eChiller installations, mainly in Germany, but the larger capacity will enable Efficient Energy to target new application areas and markets, increasing sales expectations for 2020 and 2021, the company said:

“The eChiller can be more expensive than imported chillers with synthetic refrigerants; Efficient Energy declined to say by how much. However, the price difference is reduced by subsidies for natural refrigerant equipment in countries such as Germany, France and Netherlands. Also, being significantly more energy efficient than traditional chillers, the return of investment (ROI) on the capital cost is normally only between two and four years, according to Bartmann. “When compared to units that don’t have any kind of free cooling, then it can even be paid back within one year,” he said.

How does the eChiller work?

The essentials of the eChiller are like any other chiller that works on the principles of evaporation, compression and condensation. The big difference is the refrigerant used and the very low operating pressure.

The whole process happens in a near vacuum (water as a refrigerant only works that way). Operating with water vapor in a vacuum means that leakage tests and gas sensor maintenance isn’t needed, explained Bartmann. Also, because there is no risk of leakages and the low operating pressures, the European EN378 Safety Standard is not applicable – another cost-saving benefit of the eChiller.

So, how does it actually work? Water enters the evaporator, where around 1% of the water evaporates, drawing energy from the remaining water and cooling it down. The pressure inside the evaporator is around 18mbar (0.26psi). This near-total vacuum is created by the rotating impeller in the unit’s centrifugal compressor.

In the compressor, the pressure is then increased to 136mbar (1.97psi) and the temperature rises from 16°C (61°F) to 52°C (126°F). The water vapor is cooled down, condensed, and fed back into the evaporator through the expansion device.

The standard eChiller has two cooling modules and two heat exchangers. All units are also connected to a so-called recooler, usually placed on the roof of the building. This recooler can be an adiabatic cooler or a normal dry cooler, delivered by Efficient Energy, or acquired separately by the customer. The two cooling modules, together with the recooler, gives the eChiller several operating modes and the potential for “free cooling.”

Due to the nature of water — it freezes at temperatures at or below 0°C (32°F) — the standard eChiller unit has to be located indoors. However, solutions where the eChiller is put inside a frame or container are available, allowing for outdoor locations as well. To prevent freezing of the water in the recooler loop at very low ambient temperatures, it contains 30% glycol.

At high ambient temperatures like 35°C (95°F), the two modules work in cascade, cooling down the water from the recooler to, for example, the 18°C (64.5°F) chilled water that is typically required to cool a server room. At these temperatures, the eChiller has an energy efficiency ratio (EER) of 3.4, which is “very similar to other chillers,” according to Bartmann.

When the ambient temperature drops enough that the cooling water from the recooler is at least 2°C (3.6°F) colder the return water from the server room, the first stage also switches off. This allows the system to just send the water through the two heat exchangers, achieving “free cooling an EER of up to 125, the company said, adding that, in total, an annual coefficient of
performance (COP) of up to 20 can be achieved.