Cooling that adopts to your Data Centre heat load

Sparkasse Pforzheim Calw is the largest savings bank in Baden-Württemberg, Germany. The business area includes the city of Pforzheim, the Enzkreis and the district of Calw with a total of 470,000 inhabitants. The S-IT Informationstechnologie Betreiber GmbH & Co. KG, Sparkassen-IT for short, in the Northern Black Forest, was founded as a wholly owned subsidiary and continuously builds a highly available fiber optic network with approx. 800 km of track length for the fast and secure transport of large amounts of data. The data center in Calw has been running its own and customer servers since June 2016.

The task was the cooling of a highly efficient data centre with a maximum cooling capacity of 70 kW and a cold aisle temperature of a maximum of 25 °C. The special feature of this application was the slowly growing cooling capacity requirement due to the gradual expansion of the servers. The challenge was the initial approximately only 8-10 kW cooling capacity, which corresponds to approximately 10% to 15% of the maximum final waste heat load.

The solution was to set up the server racks in warm aisle containment in the server room. The chilled air is supplied to the servers via a side cooler. The refrigeration capacity of 70 kW is supplied by a standard chiller.
During planning, the topic of refrigerant availability in combination with space-saving, integrated free cooling was included in the catalogue of requirements and prioritized.
The features of the eChiller have met all of these requirements.
With a cooling capacity of 35 kW, the eChiller was sufficient for the initial IT load and thus represented the redundancy compared to the standard chiller.
After commissioning the eChiller in summer 2016, it quickly became clear that the efficient partial load operation due to the variable speed centrifugal compressors in combination with the integrated free cooling is highly efficient. This made the eChiller the leading machine.
This operation mode has proven itself and has been maintained until today, even though the IT load meanwhile exceeds 30 kW.

The optional monitoring available for the eChiller provides the operating data of cold water and cooling water temperatures, generated cooling energy, as well as the recorded electrical energy in real time. With this data, the mode of operation can be continuously optimized. A short insight is shown in the following figure. 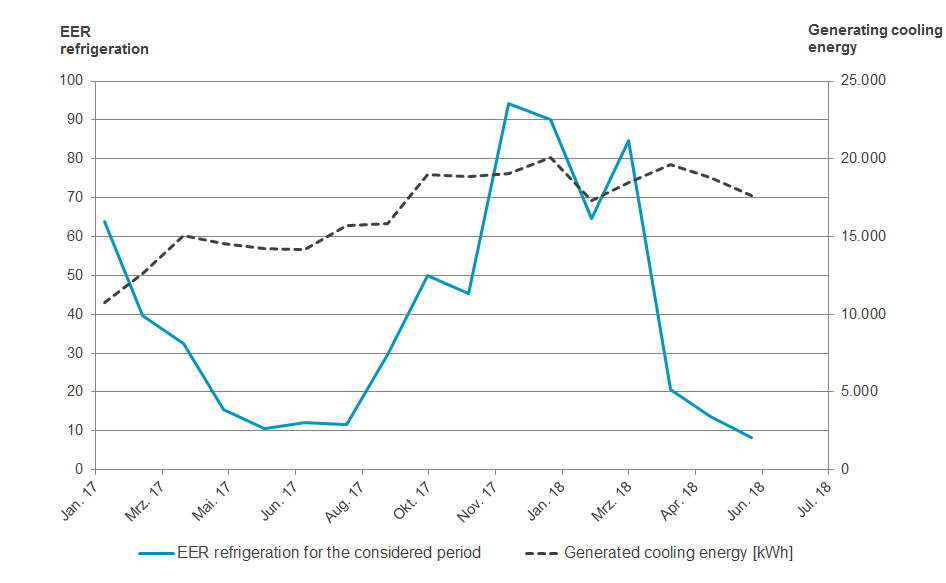 The cooling requirements have increased over the past 18 months from 12,000 kWh to an average of 18,000 kWh. The COP (refrigeration) describes the annual course of the ambient temperature and reaches an annual COP (refrigeration) [kWhK / kWhe], of over 18.